The Norwegian Financial Mechanism and the European Economic Area Financial Mechanism, i.e. the EEA and Norway Grants, are a form of foreign aid granted by Norway, Iceland and Liechtenstein to new EU member states. The funds are connected with the Poland’s accession to the European Union and the simultaneous accession to the European Economic Area (which covers the EU member states and Iceland, Liechtenstein, Norway). In exchange for the financial contribution granted to the beneficiary states the donor countries benefit from an access to the internal market of the European Union despite the fact that they are non-EU members.

The main objectives of the EEA and Norway Grants are: to contribute to the reduction of economic and social disparities in the European Economic Area and to strengthen the bilateral relations between the donor states and the beneficiary states.

Poland signed intergovernmental agreements (Memorandums of Understanding) as regards the 3rd edition of the EEA and Norway Grants on December 20th, 2017, receiving thereunder EUR 809,3 million (from the total amount of over EUR 2,8 billion), which makes Poland the largest beneficiary, likein previous editions.

The Ministry of Investment and Economic Development (MIiR) is responsible for coordination of funds implementation in Poland, acting as the National Focal Point (NFP) for the EEA and Norway Grants.  As the NFP, it collaborates with the Financial Mechanism Office (FMO) in Brussels. Particular programmes of the 3rd edition of funds will be implemented by Polish public institutions. The exceptions are, as in previous editions, areas "Civil Society” and “Social dialogue - Decent work”, which will be managed by the Donors (accordingly by the Financial Mechanism Office and Innovation Norway). 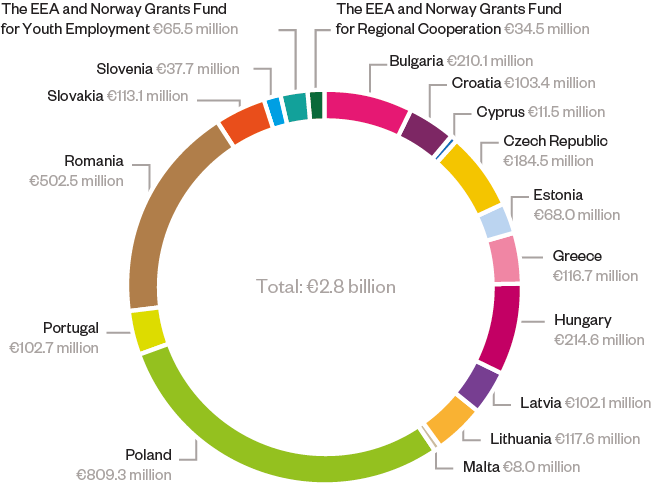